Bocas del Toro, Panama, is like something from another planet, another era even. It’s been compared to Key West, Florida, with its quaint tropical-meets-Victorian architecture. It’s been dubbed the “Galapagos of the Caribbean” due to its rich ecological diversity.

But one thing is for sure.  Bocas del Toro is uniquely alluring with a call that summons tourists and expats alike to return again and again to its myriad attractions.  It’s a great place to visit and, according to local real estate experts, an even better place to invest or buy property. 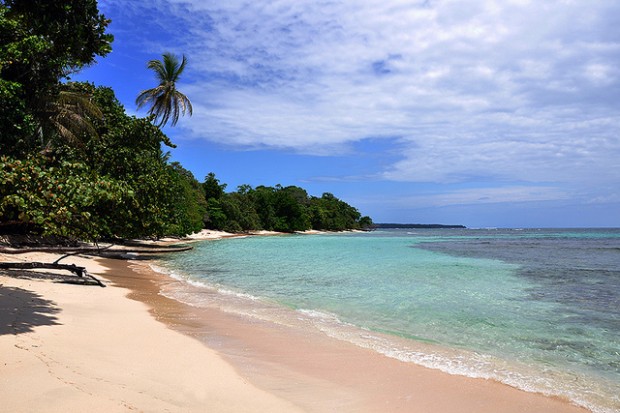 It’s rare to find a place that is the embodiment of the tropical paradise that time forgot, yet is so easily accessible. Bocas del Toro offers the best of both worlds.

Situated a short distance from Panama’s Caribbean Coast, just south of the Costa Rican border, it even has its own modern airport with several daily flights from Panama City and David.  It can also be reached by ferry, water taxi, or private boat via three full-service marinas.

Because of its location it also offers gorgeous weather that’s among the best in the region.  Rather than a long, extended wet and dry season, Bocas del Toro enjoys a bit more fluctuation throughout the year.  Granted, it can rain at any time, but the islands are generally dry during February through May and September through October.  July and December are generally the wettest months and September offers the calmest conditions at sea.

Daily temps range between the high 70s to low 90s.  The islands can also be quite humid, but the cooling breeze off the ocean does much to mitigate the mugginess. 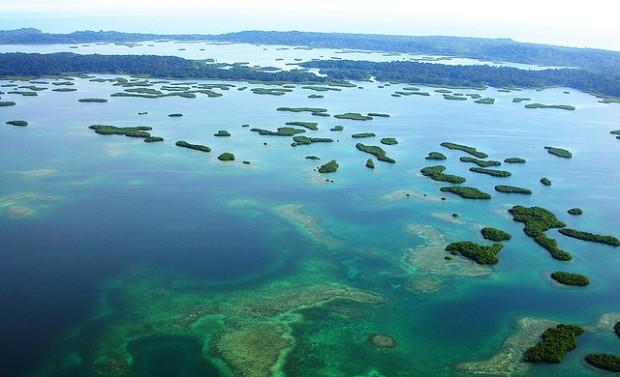 From buccaneers to bananas

The history of Bocas del Toro only adds to its modern-day charm. When Christopher Columbus first discovered the islands in 1502, he was so enamored with their beauty that he named several of them after himself: Isla Colon (Columbus Island), Isla Cristobal (Christopher Island), and Bahia de Almirante (Admiral’s Bay).

During the 17th century, the islands were popular among pirates who came to repair their ships and, reportedly, bury their treasures. Although, to date, none have been found.  The indigenous people were nearly wiped out by disease and Spanish militia before the area was finally settled by wealthy aristocrats in the early 19th century.

Following the abolition of slavery, the servants of these early settlers were joined by Jamaicans and other islanders who began to make a living by fishing and raising bananas.  This is still a thriving industry today, as the plantations of Bocas del Toro contribute to the multinational Chiquita Brands International, with Bocas alone exporting 750,000,000 tons of bananas annually.

The entire archipelago lies in a tropical rainforest ecosystem.  As a result, the islands are lush with tropical flora and fauna.  It looks like a postcard everywhere you turn.  In the jungles you’ll find rare species of birds, butterflies, sloths, monkeys, and even the tiny poison dart frogs that are indigenous to the islands.

The island’s nine main islands, plus 52 cays and hundreds of additional islets, are perfect for exploring by kayak. Surrounding the islands are hundreds of mangrove keys and virgin coral reefs teeming with exotic aquatic species.

The islands themselves offer white sand beaches that are pristine against the turquoise waters. Snorkeling and diving are popular activities in Bocas del Toro, as are surfing, boating, and island hopping. On land, there are also plenty of opportunities for camping, hiking, and exploring the jungles.

Perhaps the largest attraction in Bocas del Toro, Panama is Bastimentos National Marine Park, the first in the country and one of the most important in the world. Covering over 30,000 acres, it’s a protected area for the endangered manatee, as well as a spawning ground for tarpon. The area is also a great place for watching dolphins and sea turtles.

Why photos of Bocas del Toro are so easily recognizable

Once you’ve been to Bocas del Toro, you can immediately choose its picture out of any lineup.  The area is famous for its structures that are built on stilts in the water.  As a result, it makes for a striking skyline.

Spending time in Bocas means shopping, dining, and even sleeping out over the calm waters of the Caribbean.  Many beachfront homes in Bocas del Toro are situated out over the sea.  These houses and commercial areas are charmingly set amongst the lush tropical landscape, which stands out against the 10,000 foot peaks that are visible on the mainland.

Aerial photos of the area show heavily treed islands dotting a crystal blue sea, with dozens of thatched roof structures sprinkling their shores, a scene you might recognize from the opening credits of any number of the “Survivor” series as so far 18 countries have traveled to Bocas to film theirs. 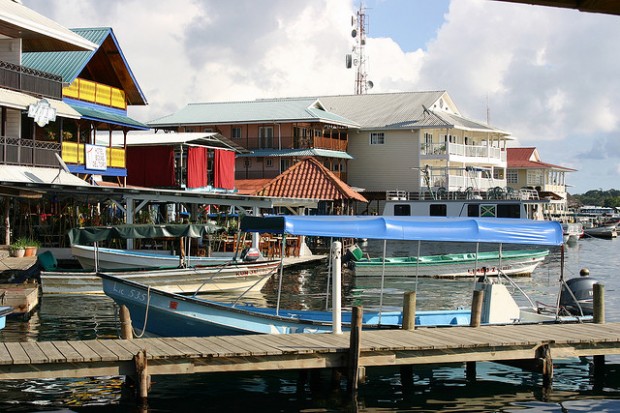 It offers the right balance of rustic versus recent

The islands and their central city of Bocas Town are charmingly quaint, with their Caribbean colonial structures, a style that is required of all new construction.  The streets are paved.  The water is drinkable.  And the hotels offer modern conveniences such as cable television and wireless internet.

Yet everything is distinctly laid-back and pleasantly behind the times. Accommodations lean towards rustic and authentic, rather than posh.  Ecolodges abound, and sustainable tourism is a major focus.  There’s no electrical grid, as the entire area is powered by a generator plant.  As a result, the area is protected from overdevelopment and prices have remained low.

Another major nod to Bocas Del Toro’s authenticity is the way it has integrated the local Ngobe-Bugle people into the overall island experience.  The indigenous people share their traditional customs with visitors.  They thrive by fishing, farming, and selling their handmade crafts to tourists. 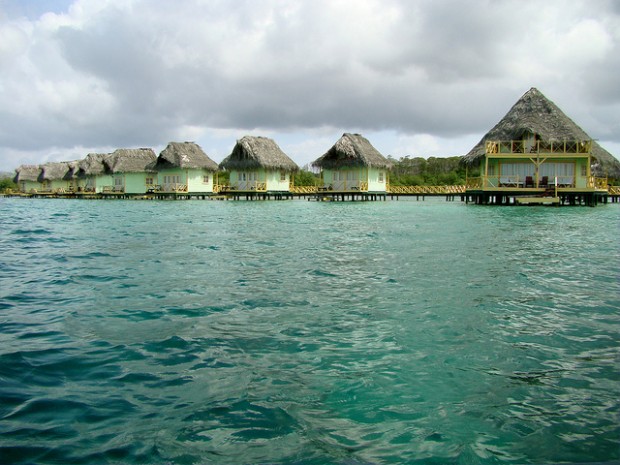 Not too slow, not too fast…the pace of life in Bocas del Toro is just right

Many residents of Bocas del Toro choose it for their home due to the very same appeal that wows tourists the moment they step off the boat or plane. It’s the indescribable warmth and ease of the area and its people.

Much like being on a perpetual vacation, it’s completely free of the hassles the rest of the world encounters on a day-to-day basis. There’s no traffic, no smog, no hurried atmosphere.

In Bocas del Toro, Panama, everything moves at a calm pace so as not to distract your attention from the overwhelming abundance of unspoiled nature that surrounds you. And that won’t change any time soon.

The islands of Bocas del Toro are known around the world for their distinct tropical appeal. Panama’s top tourist destination, they attract visitors from all over the world. Many of them are so wowed by the islands’ natural beauty and atmosphere that they end up making it their permanent home. Yet, property in Bocas del Toro remains surprisingly affordable.

In fact, it’s one of the few areas like it that are still left in the region. It offers a variety of living options, from oceanfront homes to jungle retreats, that can still be had for a fraction of the cost of similar properties elsewhere.

As a result, the area has been drawing quite a bit of attention in recent years. However, per J.B. Seligman of Buena Vista Real Estate, Bocas attracts a slightly different crowd than many other expat destinations in the tropics.

Seligman says today’s newcomers are around 35 or slightly older, ranging from those with young kids to those whose kids are almost ready to leave the nest. Rather than waiting until retirement age, they want to invest in property that they can use to earn an income so that they can start enjoying the tropical lifestyle now. 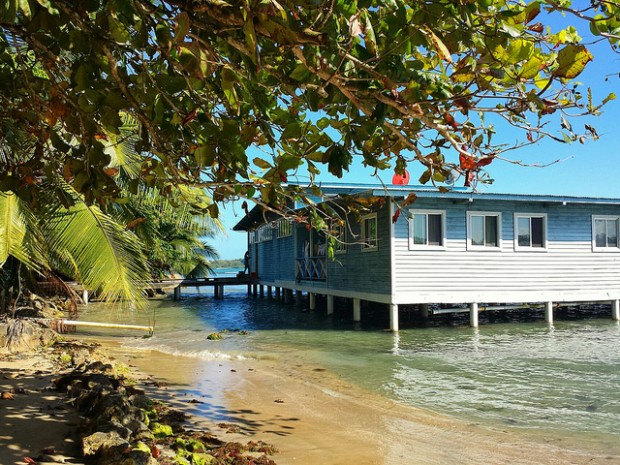 According to Seligman, the global economic crisis was felt deeply in Bocas del Toro, but it’s definitely now on the upswing.  More reasonably priced properties are what’s moving, and he indicates he sees that trend continuing.

“I see Bocas continuing this upward swing but at a controlled pace, a good pace, for the next 2-3 years,” says Seligman. 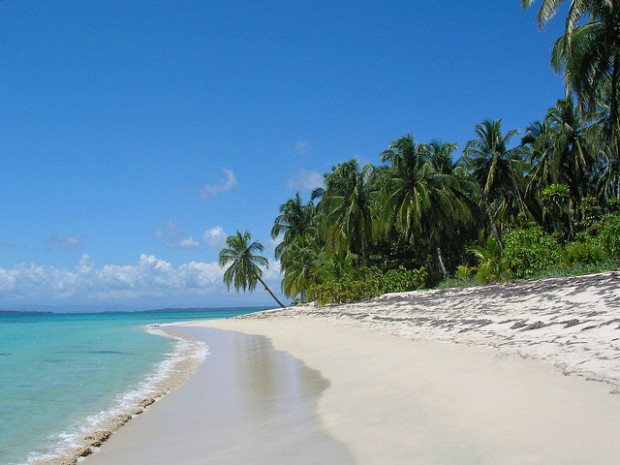 Come to visit…stay to live, work, and play

In short, Bocas del Toro, Panama, is a destination like no other. It’s rich with authentic culture, charm, and natural beauty. It’s no wonder tourism to the area is on the rise.

It’s also not a surprise that so many tourists are making the decision to live, invest, or even start a business in Bocas del Toro.  With so much to do and see in the area, there’s no indication the influx will slow in the near future.

Bocas del Toro is the perfect setting for the right investor to open an ecolodge, tourism operation, or another business catering to travelers. The nation of Panama is pro-business, pro-investor, and incredibly pro-tourism. And the opportunity to own a perfect piece of island paradise has never been more attractive for the entrepreneurial expat.

No comments to show.